HSE students are growing up in the Digital Age, and HSE teachers are gradually shifting practice to harness the potential of teens’ digital devices–for learning! Ms. Druelinger shares a telling example:

Several years ago, high school cell phone policy changed. Cell phone became allowed outside of classrooms, and in class at teachers’ discretion. I was terrified to allow phones in my room–they would be a huge distraction and I would be constantly policing them.  I made it a rule that there would no phones in my classroom, and just like I thought, I was policing and the phones were a distraction.  Last year, I changed my thinking. Instead of making a ‘no cell phone’ rule, I decided not to say anything and see what happened.  I found myself policing less.  If a phone was out, I asked that it be put away and in the same motion, went right on doing what I was doing.  There was less distraction.  This year I have decided to #embraceit and #meetthemwheretheyare . 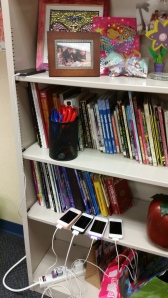 ·    I have provided a charging station and as long as a phone is plugged in before class starts, students can charge their phones on a first-come, first-served basis.

·    We have had our phones out in class to snap pictures of information, share contact information with classmates, look up words and listen to music.

·    Following a suggestion from a new colleague, students left their phones, face down on their desks during a quiz.  It was so much easier to monitor than wondering if the phone was in their lap or hoodie pocket.

In the very short time we have had together for this school year, phones have been left in backpacks for most of that time. When we do have them out, however, I have found my students to be more engaged rather than less.