Walking into Adam Jahn’s class at Fall Creek Intermediate School felt like walking into the Apple Store on Saturday afternoon. The place was hopping with activity – very purposeful activity. Perhaps my quick appraisal of the setting was due to the fact that I already knew a special project was abrew. But, confirmation bias or not, these kids were clearly psyched about something, and were completely engaged in their tasks.

Several students talked softly with others while looking over some type of map. Two others were writing and drawing in a journal. Some looked to be researching on the Internet using iPads, and, at the far table, several students were working with an iPad connected to what looked like some type of controller. These students, I was told, were programming the drone for its upcoming flight. 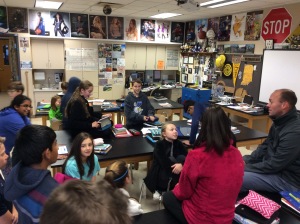 All of this bustle was a part of something big. Mr. Jahn’s sixth-grade students are on a mission to reintroduce native plants to an open area next to the school. The area, thanks to nearby construction projects over several years, has been neglected until it has become, in the words of one student, “just a bunch of dirt and weeds.” The students hope that by the end of the school year they can reintroduce species that were in this field before the suburbs arrived. To reach their goal, however, will require commitment; students must research, budget, design, plan, secure funding, and work together to creatively solve problems along the way.

Working toward their goal, each student has become part of a small team based on his/her interests. One group is researching central Indiana flora to discover what native species should be planted. Some are testing soil. Thanks to drone data (more on this in tomorrow’s post), digital maps are being printed and labeled. This was what I observed in the classroom: students hard at work on their personal niche of the project.

Tomorrow: Native Grasslands, Part 2: Can Drones Enrich Learning?
I was impressed just being in the classroom, but then I went outside for the drone flight…

One thought on “Native Grasslands, Part 1: What a Class!”